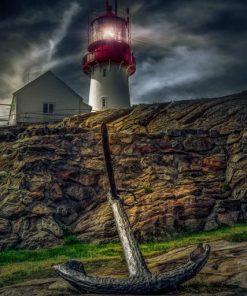 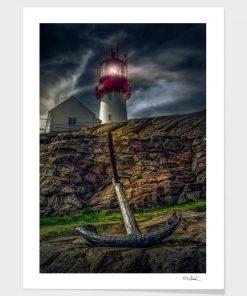 Lindesnes Lighthouse (Norwegian: Lindesnes fyrstasjon) is a coastal lighthouse and museum on the southernmost tip of mainland Norway, the peninsula Neset. It is also the oldest lighthouse station in Norway, first lit in 1655.

It has gone through several changes since it was built: In 1822, it was refitted with a coal lamp, and in 1854 a new lamp was installed with the current lens. The current cast iron tower was set up in 1915 and fitted with the old Fresnel lens. In 1920 the lighthouse station got its first fogsignal, a sirene. The fogsignal and its machinery is placed in a building beside the tower.

During WW2 Lindesnes lighthouse was taken over by the Germans. Being an important watchpoint the German-built little fortress with four guns and, after a while, a radar antenna. The traces from WW2 are visible as trenches, tunnels etc.

In the 1950s the lighthouse station was electrified and the fog signal was changed into a powerful Diaphone. The fogsignal was closed as a navigational aid in 1988 but it is still operational and is used on special occasions.

Lindesnes lighthouse is owned by the Norwegian Coastal Administration and still an active lighthouse.

All Artwork is © Erik Brede, except where otherwise noted, & may not be printed, re-distributed, modified or posted elsewhere without written authorization. I appreciate your respect for my ownership of my work & my copyrights. All artwork and content on the Erik Brede Photography website are legally protected by International copyright laws. Unauthorized duplication or usage is prohibited by the Copyright law and will be prosecuted. I protect my copyright interests.

There are no reviews yet.

Be the first to review “Lindesnes Lighthouse Part 2” Cancel reply

I use cookies to ensure that I give you the best experience on my website. If you continue to use this site I will assume that you are happy with it.OkRead more